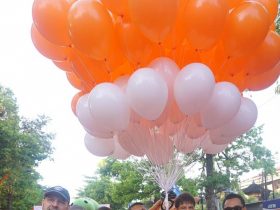 HARRIS Day Returns This Year in A Virtual Race Format

The Stones – Legian, Bali – Autograph Collection is delighted to announce the appointment of Chef Daniel  “Danny” Chaney as the new Executive Chef.  Chef Daniel was born and raised in Southern California but grew up half of his childhood in South Florida.  His dream of becoming a chef has led Chef Daniel to attend Johnson and Wales University in Florida, where  earned his degree in Culinary Art. Like most people who started their career in the Food and Beverage industry, Chef Daniel started as a  dishwasher. He gradually moved up in his career by constantly honing and crafting his skill, and he was  eventually promoted and is now an Executive Chef.

Chef Danny, who was named “Chef of the Year Hong Kong” by Foodie Magazine in 2013, is an expert on  steakhouses. In that same year, the Blue Butcher in Hong Kong, where he helmed, had received an award  by Sassy Media Group as “Restaurant of the Year”. In 2019, while holding the position of Culinary Director,  Exquisite Media had awarded “Boy’N’Cow” as “Best Steakhouse Bali”.

Before joining The Stones – Legian, Bali, Chef Danny was Chef de Cuisine at the prestigious CUTS  restaurant at the famous Rosewood Phnom Penh in Cambodia.

To get to the point in his career, becoming an Executive Chef at a Five Star hotel has always been his goal  and his greatest milestone, and he is very fortunate and very happy.  Chef Daniel wants to shift his gear to Big Fish Bar & Grill, the signature restaurant at The Stones in favor  of shared style menu. The newly updated menu that he curates will include a Jimbaran-style grilled fish,  various types of Tapas, Texan-style steak, and Peruvian Ceviche. These dishes will be using Bali’s finest local and imported ingredients to elevate our culinary offerings and entertain the palate of all food lovers.

When asked what Chef Daniel’s hobbies are, his response was “If I am not at a work and I am not at home,  you can catch me in the water, surfing”. Chef Danny is thrilled to join the Stones talented F&B team and is delighted to bring something unique  and memorable dining experience to our guests.