The Deus Gallery, Temple of Enthusiasm, Canggu recently celebrated the launch of its latest exhibition from Australian artist, David Eagles. Australia born artist, David Eagles is a figurative artist. It is not the human condition that he explores but the human experience. Through his fine art display, David’s creativity is fuelled by the chaotic nature of Indonesia’s cities, from street venders to amusement parks, rural and urban living contrasts each other in close proximity. A landscape where the traditions of the ancient Majapahit Empire are still practiced overlaid with modern street graffiti. An observation of David’s on what makes Indonesia unique, is the idea that it is a land where heaven and hell seem to have been pushed closer together than in the west, and as a result the energies of both flow proportionately throughout the cities and the land. David Eagles has worked in surf and street print design since 1987. He combines traditional painting with photography, digital print screen print and is not shy around a spray can. David has been exhibiting regularly since 1988.  His works are in private collections in Australia, Indonesia and Taiwan. David was the creative force behind the street wear label ‘3rdborn’ and earlier spent a decade designing artwork for international surf wear brand Quicksilver where he worked alongside fellow artists; Peter Webb, Simon Buttonshaw, Clayton Barr and Nick Morris. David Eagles is donating 10% of the sale of his art to Keep Bali Clean, an environmental campaign focused on reducing litter in Bali. 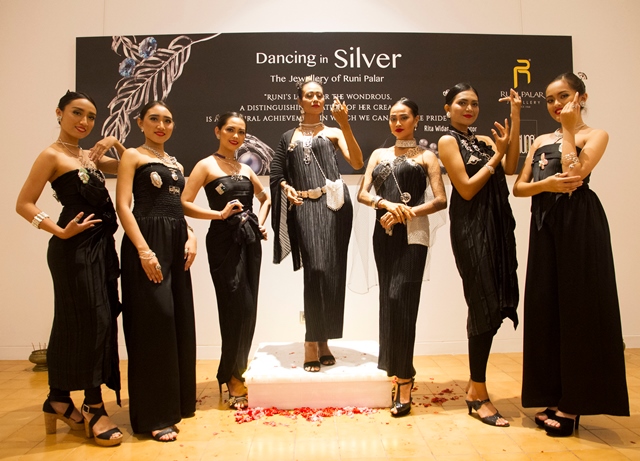 The launching of Dancing in Silver: The Jewellery of Runi Palar Book and an Exhibition of Her Latest Silver Works