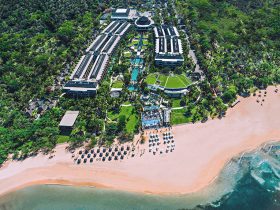 The Nusa Dua Beach Hotel and Spa is pleased to announce that Mr. Pierrick Gautier has been appointed General Manager effective, 01 July 2022.

Pierrick started his chosen hospitality career in his home country of France, continuing on to USA, London, New Zealand and then moved on to join other prominent international chains. Having begun his career in Food and Beverage, Mr. Pierrick Gautier worked his way up to the position of General Manager, in Paris. From 2010, he had multiple appointments in Paris with key hotels under his belt. Five years later, he relocated to Southeast Asia to become General Manager for Ibis brands in Jakarta. In 2018, Mr. Gautier was promoted Cluster General Manager Midscale and Economy Brands for Accor following to Area General Manger in 2021 taking on a larger role in the organization.

Most recently, Mr. Gautier was Cluster General Manager for Jakarta, Bandung and Yogyakarta regions to support the transition, growth and launch of a new Brand under the name of Kimaya Hotel Group operated by The Ascott Limited.